I have worked on several projects with Micky. She is extremely professional with an amazing ability to pay attention to details.

Her ability to transform a complex content draft into an organised, concise and easy-to-understand piece of content, has played an important part in making our marketing a success.

I used Triple W Communications to improve the SEO and content of my website. I found Micky to be very professional, honest and knowledgeable, and she guided me through the whole process.

Using a creative approach, Micky was able to transform all my ideas into words so my website content became user-friendly and very professional and at the same time optimised for the search engines.

From the very start Micky had our best interests in mind with her attention to detail, exceptional SEO advice and professional, creative writing.

We will continue to use Micky as she has been a great part of our success.

I appreciated the timeliness of her service, professional ethic and the confidence that came with her SEO knowledge and ability to write engaging content.

I have just read through your SEO audit report. Thank you for its clarity and user friendliness. At last, I feel empowered! I can't tell you how confusing and complex I've found other analyses - like reading a language I don't understand. Your report is like having an interpreter in that language.

I love working with Micky. She is a talented and responsive professional with a fantastic knowledge of SEO that she explains simply and concisely into easily achievable steps.

Her outstanding skills have made her an invaluable asset to my web presence.

Exceptional writer with an amazing ability to research and develop content that is 100% accurate when she has had no prior knowledge of the subject.

Our content needed more structure. We wanted to find someone who had professional experience with writing skills and knowledge of SEO.

Micky was the answer to our prayers. I have been doing business on the Internet since 1995 and working with Micky has been one of my most memorable experiences.

There is nothing we would want to change, it is perfect how it is. It is going to make a big difference.

Your SEO review has opened our eyes so much on things to do with our website.

I knew what I wanted to say but it needed your analytical skills and creative & incisive writing to drive the messages home.

Thank you for providing clarity, focus, professionalism and for going beyond expectations.

Hiss to stay in shape 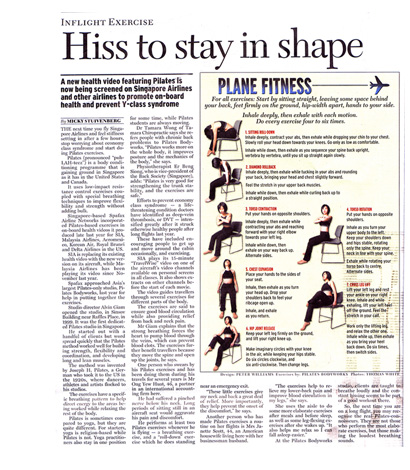 THE next time you fly Singapore Airlines and feel stiffness setting in after a few hours, stop worrying about economy class syndrome and start doing Pilates exercises.

Pilates (pronounced ”puh-LAH-teez”) is a body conditioning programme that is gaining ground in Singapore as it has in the United States and Canada.

SIA is replacing its existing health video with the new version on its aircraft, while Malaysia Airlines has been playing its video since November last year.

Studio director Alvin Giam opened the studio, in Sinsov Building near Raffles Place, in 1999. It was the first dedicated Pilates studio in Singapore.

He started out with a handful of clients but word spread quickly that the Pilates method worked well for building strength, flexibility and coordination, and developing long and lean muscles.

The method was invented by Joseph H. Pilates, a German who took it to the US in the 1920s, where dancers, athletes and artists flocked to his studios. The exercises have a specific breathing pattern to help direct energy to the areas being worked while relaxing the rest of the body.

Pilates is sometimes compared to yoga, but they are quite different. For starters, yoga is religion-based while Pilates is not. Yoga practitioners also stay in one position for some time, while Pilates students are always moving.

Dr Tamara Wong of Tamara Chiropractic says she refers people with chronic back problems to Pilates Bodyworks. ”Pilates works more on the whole body, it improves posture and the mechanics of the body,” she says.

Physiotherapist Er Beng Siong, who is vice-president of the Back Society (Singapore), adds: ”Pilates is very good for strengthening the trunk stability, and the exercises are safe.”

Efforts to prevent economy class syndrome – a life-threatening condition doctors have identified as deep-vein thrombosis, or DVT – intensified greatly after it struck otherwise healthy people after long flights last year. These have included encouraging people to get up and move around the cabin occasionally, and exercising.

SIA plays its 15-minute ”TravelWise” video on one of the aircraft’s video channels available on personal screens in all classes. It also shows extracts on other channels before the start of each movie.

The video guides travellers through several exercises for different parts of the body. The exercises are said to ensure good blood circulation while also providing relief from back and neck pain.

Mr Giam explains that the strong breathing forces the heart to pump blood through the veins, which can prevent blood clots. The exercises further benefit travellers because they move the spine and open up the joints, he says.

One person who swears by his Pilates exercises and has been doing them during his travels for several years is Mr Ong Yew Huat, 46, a partner in an international accounting firm here.

He had suffered a pinched nerve below his neck. Long periods of sitting still in an aircraft seat would aggravate his pain and discomfort.

He performs at least two Pilates exercises whenever he is flying – a breathing exercise, and a ”roll-down” exercise which he does standing near an emergency exit.

”These little exercises give my neck and back a great deal of relief. More importantly, they help prevent the onset of the discomfort,” he says.

Another person who has made Pilates exercises a routine on her flights is Mrs Janette Scott, 44, an American housewife living here with her businessman husband.

”The exercises help to relieve my lower-back pain and improve blood circulation in my legs,” she says.

She uses the aisle to do some more elaborate exercises after meals and before sleep, as well as some leg-flexing exercises after she wakes up. ”It also helps me relax so I can fall asleep easier.”

At the Pilates Bodyworks studio, clients are taught to breathe loudly and the constant hissing seems to be part of a good workout there.

So, the next time you are on a long flight, you may recognise the real Pilates-connoisseurs. They are not those who perform the most elaborate exercises, but those making the loudest breathing sounds.

Text of story as published in The Straits Times, Singapore, April 24, 2002